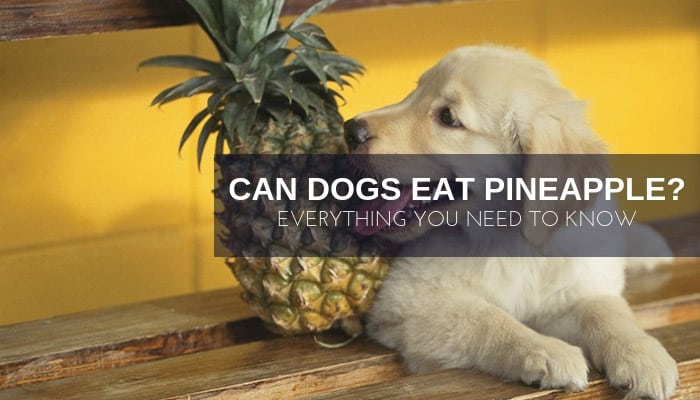 Can dogs eat pineapple? It might seem like a strange question to ask—but then again, when was the last time you heard of someone actually feeding this specific type of food to their canine companion? As people start taking the health of their animals even more seriously, the question bears asking—should foods like this be included as a part of your dog’s everyday diet? Or is it better to stick to more ‘traditional’ foods?

According to researchers, there is a lot of speculation about the origins of the ‘domestic dog.’ We know that today’s domestic dog is a member of the genus Canis. We also know that dogs are the most widely abundant terrestrial carnivore. There is also a lot of evidence to support the fact that dogs were not only the first species to be domesticated by humans, but that they were also domesticated long before the advent of agriculture.

It seems very likely that our hunter-gatherer ancestors traveled and lived with dog companions. There is certainly a lot of history there—but today, dog owners are cranking up the relationship a notch by taking the care of their animals to the next level.

This is actually awesome, because dogs have long dealt with a number of health issues resulting from poor nutrition. Nowadays, cheap bulk dog-food can be so devoid of proper nutrients that it is almost not even advisable to give your pet!

So dog owners are educating themselves. But what about pineapple?

Let’s get into it.

A pineapple plant, also known as Ananas comosus, is ‘a fruit-bearing plant of the family Bromeliaceae.’ If you are fond of Polynesian cuisine, oriental-style cooking, or pina coladas, then you have doubtlessly experienced the sweet, yet slightly bitter taste that pineapple brings to any dish or drink.

But what about its health benefits?

Humans consume Pineapple for a number of different reasons. Yes, it is delicious… both alone and as an ingredient. But it also contains a lot of nutritional value. Pineapple is rich in vitamins, enzymes, and antioxidants. It is a known immune-system booster, and helps those who eat it to build stronger bones.

There is even a lot of evidence to support the fact that it helps with indigestion as well!

As far as specific vitamins, minerals, and enzymes go, Pineapple is rich in and/or contains at least decent amounts of…

It is also a low-calorie food. One cup of pineapple chunks only contains about 82 calories—making it perfect for any diet where calories are restricted. It is also quite sweet and tasty for how many calories are in it; which makes it double-awesome!

But what about dogs? We know that humans can eat pineapple, and that it is actually good for them. But can dogs eat pineapple?

According to the American Kennel Club’s website, pineapple actually makes a decent snack for dogs… though it should be served in moderation. As far as dogs are concerned, pineapple is actually a pretty nutrient-dense snack—though it does contain a few things to be cautious of.

It is not only tasty, but also helpful for your dog’s digestive health and immune system.

But still, with that being said, there are some considerations to take into account.

For one, keep in mind that pineapple is high in fiber, while also containing significant amounts of natural sugar. It is fine in small quantities, but in larger quantities it could feasibly cause some problems. Some dogs develop stomach problems or diarrhea if they eat too much of the fleshy, tangy food.

It is also not advisable to give your dog the core of the pineapple. This might seem like an obvious, nutritional alternative to a soup bone—but it is actually not safe. The central core of a pineapple is tough, and can cause obstructions in your dog’s digestive tract. Also, of course, you should avoid letting your dog get a hold of any parts of the spiny outer skin.

For best results, stick to feeding him/her the juicy flesh between the core and the outer skin.

What Kind of Pineapple Should You Give Your Dog?

While fresh pineapple can be a healthy choice for your dog in small amounts, you should absolutely stay away from the canned variety. Many people see canned pineapple as more convenient, which it is. Buying canned is not only cheaper, but it also takes less time. This is awesome for people—but the canned version of the food is not so great for your canine companions!

The problem with canned pineapple is that it often contains a lot of sugar—too much for your dog’s sensitive digestive tract.

Most specialists agree that if you wish to serve your dog pineapple, the best way to do so is to buy it fresh.

How to Serve Your Dog Pineapple

The best way to serve pineapple to your dog is to buy it fresh, cut it up, and separate the core from the juicy, tender meat of the fruit. Do not feed your dog fruit from the core! Instead, cut up the juiciest, most tender part of the fruit and give it to your dog in bite-sized portions, cut up small enough that there is no risk of choking.

As for ‘how much’ to serve, you should stick to one chunk at a time until you know that your dog will not suffer any adverse side-effects. After that, you can work your way up to a few chunks per day, as desired.

Many dogs actually really like the sweet taste of pineapple—but not all dogs are the same. If your dog isn’t into it, don’t stress over it! There are plenty of awesome substitutes out there. Strawberries and watermelon are just two examples of fresh fruits that many dogs love to eat. These are also full of nutrients, not so unlike their tropical counterpart the pineapple!

Is It True That Pineapple Will Help Your Dog to Stop Eating Poop?

There are some rumors going around online that suggest feeding pineapple to your dog can stop it from eating its own poop.

Dogs who eat their poop can be troublesome. We often see this as a pretty disgusting habit, so it is not surprising that people would be out to find a remedy for it.

As it turns out, feeding your dog pineapple might help to alleviate this problem—though it doesn’t always work. There can be a number of reasons for why a dog might eat his/her feces. Some of these reasons could include…

If your dog tends to eat a regular diet of bagged dog-food, it is very possible that they are eating poop because they are not getting the nutrients they need. It could also be true that the food is so tasteless that it actually tastes about the same the second time around!

Note: If you love your animal companion, look into his/her diet and avoid feeding cheap department store dog-food. Do some research and you will see that it is simply not a good choice!

Feeding your dog a bit of pineapple every day can help to solve this problem in two different ways. First off, it can help to give your dog more adequate nutrition. If they are eating poop because of poor nutrition, this can certainly help the problem. And secondly, pineapple can give them a tasty treat to enjoy and distract them from the alternative, less appealing habit that they have been engaging in!

But keep in mind that while pineapple can help to solve this problem, it will not always do the trick either. Dogs who eat their own poop are often suffering from behavioral problems that are hard to curb, and though pineapple has been said to make their poop smell worse (thereby theoretically deterring them from eating it), this theory actually has little effect on them.

So feeding your dog pineapple to try to get him/her to stop eating their own feces is not a bad idea by itself—but a better idea may be to pick up their poop soon after it appears, in hopes that you can keep them separated from it and discourage the habit that way.

Pineapple is awesome for your dog, but it may not be the ‘cure all’ for this particular problem!

Other Ways to Feed Pineapple to Your Dog

If dogs can eat pineapple, then you may be wondering if there is any alternative way to feed it to them other than raw. We know that canned pineapple is not good for dogs, but what about cooked pineapple?

As it turns out, there are a variety of tasty treats that you can make for your dog using pineapple as an ingredient. Homemade treats are almost always better than the store-bought treats for two major reasons.

This is a pretty fun way to feed your dog pineapple if he/she does not like the taste of it raw. It is also fun to make treats like this anyway, especially if you love your dog and love to do things for him/her.

When Is the Best Time to Feed Your Dog Pineapple?

As a general rule, snacks like pineapple or pineapple treats should be used as rewards for good behavior or for during training. Rewarding your dog for good behavior helps to build a positive bond between the two of you—but it also gives your dog an even better reason to do what you say!

Teaching your dog to beg politely is not as difficult as you may think, and pineapple can be an awesome tool to use for this exact purpose! Since it is sweet, but also nutritious, your dog will both love it and benefit from it!

Most experts agree that dog treats should not exceed 10% of your dog’s calorie intake each day. Feeding too many sweets can give your dog too much sugar. Plus, pineapple has a lot of fiber in it—which can be a little hard on your dog’s digestive system in large amounts.

If you have a 30 pound dog, you should probably limit pineapple snacks to no more than 6-7 bite-sized chunks per day. It is also not a good idea to feed pineapple snacks to puppies who are 12 weeks old or younger. Puppies of this age are still in their formative stages, and should only consume foods that actually meet all of their nutritional needs.

As your dog’s owner and caregiver, it is obviously important to know and understand what you are feeding your pet. And reading articles like this is an awesome step in the right direction! Just keep doing your best and caring for your dog, but also don’t forget to continue to educate yourself.

We never stop learning about our beloved canine companions. They are a long-term commitment and deserve the very best that we have to offer!

So can dogs eat pineapple? As it turns out, they can! Just follow good advice and feed responsibly, and you should have absolutely no problem with it!

Can Dogs Eat Pineapple? What You Should Know! was last modified: January 20th, 2019 by Lilly Jones

Follow me
Lilly Jones
More at about me.
I am a fan of dogs, travel, and photography. Proud mother of two boys and Lucky, my German Shepherd Mix. What else can I say? I'm a very passionate dog lover and I've had dogs by my side for as long as I can remember.