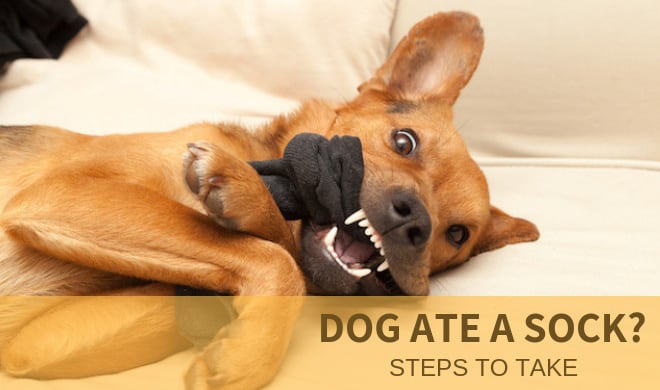 We’ve all heard the old joke excuse “my dog ate my homework”, but you would be surprised by how common it truly is to have dogs eating what they shouldn’t.

Whether it be chocolate or an avocado, dogs tend to find a way to eat what is bad for them. And it’s not only toxic foods they tend to have a taste for, but would you believe it, it’s also extremely common for dogs to enjoy chewing and eating inedible objects.

There are a few things that might happen if your dog decides to devour a sock. An easy thing to deal with is if they’re able to vomit it back up themselves, your dog might not realise it shouldn’t eat a sock, but his stomach will and should take action to get it out of the dog’s system.

Another way in which the dog may handle the situation itself is if it is able to let the sock pass through its system, and poop it out. That being said, socks aren’t exactly digestible so your dog might not be able to pass the sock through its intestines, assuming the sock even makes it that far. 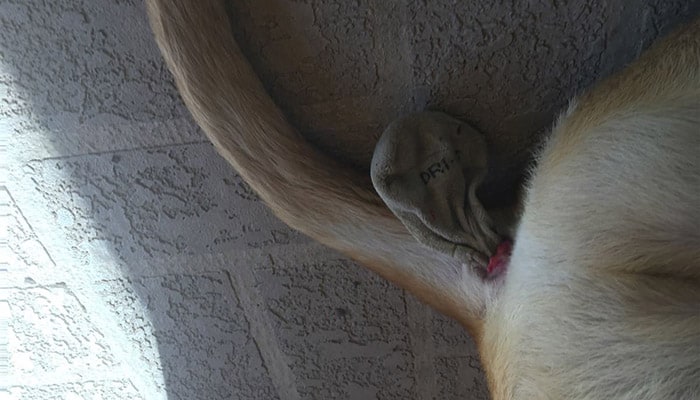 Regardless of whether you think your dog is able to deal with the sock situation alone or not, there are steps you should take if you know, or think, that your dog has eaten a sock.

Your dog ate a sock. Now what?

Call the vet. If you know or even suspect, that your dog has eaten a sock, the first thing you should do is call your vet.

The digestive system, of any animal, does not have the ability to deal with items that can’t be dissolved into the intestines as food does.

So items like clothing can get stuck as they can’t be broken down.

This means, if the sock doesn’t get stuck in the stomach, there is a relatively large chance that it could become stuck in the intestines. 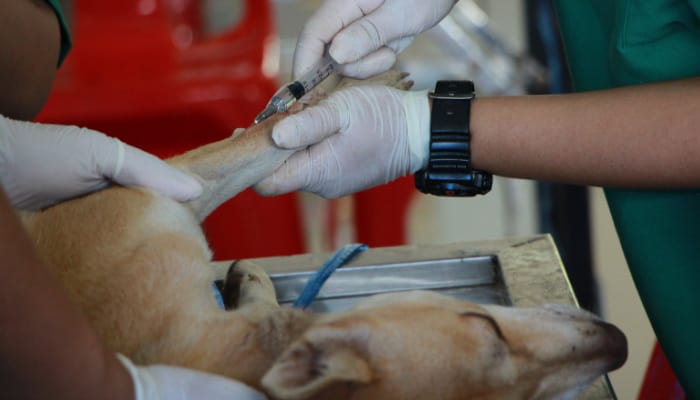 Luckily, vets are used to dealing with dogs eating bizarre objects so will know what to do if your dog has consumed one of your socks. They’ll most likely either guide you through dealing with the issue or will ask you to bring your dog to the veterinary clinic so that they can help your dog themselves.

If caught early enough, the vet may either induce vomiting in your dog or pump his stomach. This is to prevent the sock from making its way into the intestines, which could end up requiring surgery. And while in some cases, the dog is able to vomit up the sock themselves, the majority of the time they will need help from a veterinarian.

It’s better to be safe than sorry when it comes to your pet’s health so always seek veterinary assistance if you’re unsure.

If your vet doesn’t induce vomiting or pump your dog’s stomach, they may turn to use an endoscope to retrieve the sock manually from within your dog. It’s more expensive than inducing vomiting, but not as expensive as surgery. An endoscopy is unfortunately useless if the sock does, in fact, make it into the intestines.

Why Does My Dog Eat Socks?

It isn’t fully known why dogs eat socks, amongst other inedible objects, there are a few potential reasons as to why your dog has developed this sock fetish.

The most likely reason could be that they’re bored. A bored dog will seek out things to play with and chew on. The best way to solve this kind of issue is to look for different toys and forms of enrichment that can keep your dog busy when you are out or not able to keep them occupied.

Another potential cause as to why your dog ate a sock, is anxiety.

A different theory in what could be causing your dog to eat socks is the desire for attention.

It’s crucial to remember that dogs are social creatures and when they’re not experiencing enough interaction, they will turn to more ‘naughty’ behaviours that they know will get their human’s attention.

This, luckily, is rather easy to rectify. Simply spending more time with your dog, playing with them and fussing them, will encourage them to abandon their sock diet since they’re already receiving the attention they need.

Unfortunately, if your dog frequently seeks out socks, as well as any other object for that matter,  to eat, then it could be suffering from a disorder known as PICA.

PICA is a medical condition referring to a dog craving inedible items as food, like socks for example. The types of behaviours displayed from a dog suffering from PICA can be very dangerous to their gastrointestinal tract since the objects they’re eating could cause some serious damage if they were to get stuck.

Not forgetting to mention how expensive it can be to have to constantly seek out veterinary help because your dog is eating things that he shouldn’t be. Naughty Fido!

If you’re reading this description and thinking that your dog may be suffering from PICA, worry not – because it can be solved if caused by a medical issue, such as diabetes or inflammatory bowel disease. However, if there is no clear medical issue, a full history of the dog will need to be analysed by the vet so they can draw up a treatment plan.

Regardless of how easy PICA can be solved, try to keep your dog’s most craved items out of its reach to prevent further consumption.

What Are the Symptoms of an Obstruction?

If you’re worried that your dog is suffering from an abdominal or intestinal obstruction, the key symptoms to look out for are:

Even if you haven’t witnessed your dog eating a sock or any inedible object for that matter, if they are displaying any of these symptoms then there is a rather likely chance that they could be suffering from an obstruction.

Read Also:  How to Give Your Dog a Pill or Medicine: Quick and Easy

Intestinal obstructions can be hard to spot, which is particularly scary with the knowledge of how serious they can be. If your dog is struggling to defecate – straining when you take them for walks – then they probably have something, like a sock, stuck.

If this is the case, call your vet immediately, as the sooner you act, the better for your dog’s intestines. It’s amazing the kind of damage that can be caused to the intestines by a singular sock.

What if it Happened Hours Ago?

Whilst some larger dogs find it easier to pass objects like socks, whether it be through vomiting or excretion, most dogs can – and probably will – end up with sock becoming lodged within their stomach or intestines.

Waiting too long could cause serious damage to your dog’s organs, or even risk their life.

Can I Induce Vomiting Myself?

Sure, it can probably save you money on vet bills if you’re able to get the sock out yourself. But it’s best not to without explicit guidance from your vet, and it’s only ever suggested if you’re unable to get your dog down to the clinic for whatever reason.

Most vets will tell you not to try getting your dog to vomit as it can be extremely hazardous without the knowledge and facilities that your local vet will have.

For example, the sock could become lodged in your dog’s throat, which runs the risk of choking – something that a vet could easily handle.

How Can it be Prevented?

First of all, be careful where you leave your socks. Obvious as it may seem, you have to remember that dogs are pretty clever so you may have to be extra vigilant with where you keep your socks.

You can also look into toys and other forms of enrichment that will help keep your dog busy, stopping them from craving something like a sock to chew on. A Kongo filled with some pate or peanut butter would be a good place to start.

If these aren’t working as preventative measures, you can also seek out help from an animal behaviourist, or even your vet, to help guide you in the right direction in helping your dog.

Just remember, it’s not the end of the world if your dog ate a sock. If you call your vet as soon as possible, your best friend will be back to normal in no time.

Nadia Aslam
Nadia is a specialist canine writer hailing from England. With over ten years of experience in training, and rehabilitating canines. She is well known for her easy to read dog training articles and books!