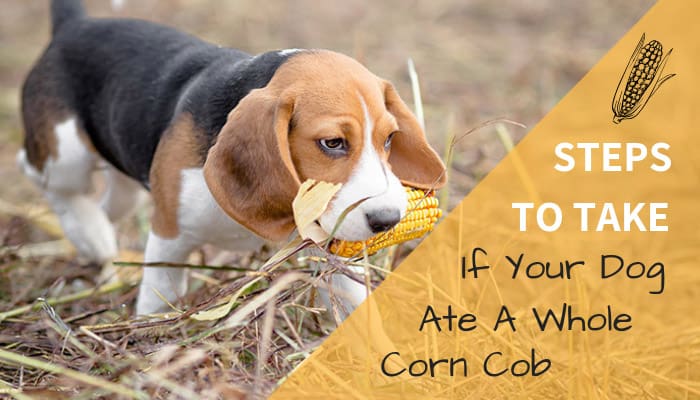 While most dog owners know of the potential dietary problems that can arise from feeding your dog scraps from the dinner table, many think that feeding their dogs corn on the cob is a healthy way to get around that certain rule of dog care. They would think that if a dog ate a whole corn cob, there’s nothing to worry about as it’s a healthy and easy way to keep a dog busy.

Even though corn itself is a rather healthy snack with it generally being neither harmful or toxic – that is, unless your dog suffers from a corn allergy – corn cobs are best to be avoided. The main issue is that when consumed in large chunks, or whole, the cob can become an intestinal obstruction – a condition that can, unfortunately, be fatal.

Most vegetables are easily digestible, but dogs’ stomachs are unable to break down corn cobs, so the likelihood of them causing a blockage in the intestines is high. This then can put your dog at serious risk of intestinal damage, like perforation of the intestines.

Call your veterinarian as soon as possible; this is vital as not only saves your dog from a lot of pain that could occur from the corn cob making its way into the intestines. It also saves money in the long run, as it’s easier for the vet to remove foreign objects from the stomach than from the intestines.

However, it’s not always easy to know for certain if your dog ate a whole corn cob or something else it shouldn’t have, so if you notice that your dog has started vomiting up food, or even just fluids. And even though a well-known sign of an obstruction in the intestines is difficulty defecating, it’s important to remember that dogs with intestinal blockages can be perfectly capable of going to the toilet for a couple of days. So, even if your dog is displaying ordinary bowel movements, if they are vomiting you need to seek veterinary assistance.

Either your veterinarian will guide you through the process of helping your dog vomit up the corn cob, or they will tell you to bring your dog into the clinic as soon as possible. It will most likely be the latter, considering the solid form of the cob and how easily it could become a choking hazard.

Overall, if you have any suspicion that your dog ate a corn cob recently, the first thing to do is call the vet. A lodged corn cob can lead to perforation of the intestines and internal bleeding. Calling the vet is vital to your dog’s health and, even, survival.

Read Also:  How to Give Your Dog a Pill or Medicine: Quick and Easy

Sweet Corn is actually pretty healthy still. It’s a great source of energy and protein, and even contains fatty acids essential to a healthy canine diet. Scraping off the kernels from a corn cob is a great alternative to giving your dog access to a whole cob to chew on.

That being said, be aware that some dogs may have developed an intolerance towards corn. Whilst it’s not a common allergy for a dog to have, it is always best to be wary with more sensitive dogs.

What Are the Symptoms of a Corn Allergy?

The common symptoms of a corn allergy include:

What is an Intestinal Obstruction?

An intestinal obstruction occurs when the small or large intestines are blocked, usually by a foreign object. They can be extremely painful and can, unfortunately, be fatal when not treated properly.

An obstruction that isn’t removed can cause perforation of the intestines, or even rupture them. This can lead to all sorts of issues such as internal bleeding and the leaking of harmful bacteria into the abdominal region.

It’s vital that an intestinal obstruction is treated as soon as possible as it can be extremely life-threatening. The sooner you contact the vet, the better.

What Are the Symptoms of an Intestinal Obstruction?

If you suspect that your dog may have eaten a whole corn cob, or any inedible object for that matter, call your vet immediately. However, if you aren’t really sure then monitor your dog in case it displays any of these symptoms:

Though, as previously mentioned, it is important to remember that your dog can still pass ordinary stools for a couple of days when it first develops an intestinal obstruction. So, if your dog is displaying other symptoms whilst not suffering from diarrhoea or constipation, that doesn’t necessarily mean that your dog does not have a foreign object lodged in their intestines.

Should I Induce Vomiting?

Generally speaking, you shouldn’t induce vomiting in your dog at home.

It can be extremely dangerous, and at home, you don’t have the knowledge or facilities of a vet to fix the situation if things were to go wrong.

Corn cobs, in particular, are a pretty severe choking hazard. Whilst some larger dogs could potentially vomit up the cob – again, still avoid encouraging your dog to vomit – most dogs would struggle to shift such a large and solid object through their oesophagus. There is a rather large risk of it becoming lodged.

Unless under exceptional circumstances where you cannot get your dog to a vet and it has not long eaten the whole corn cob, your vet may guide you through the process of safely inducing vomiting in your dog.

However, inducing vomiting should be left to the professionals as it can be a huge risk to your dog if not done properly.

How Can I Share Leftover Corn With My Dog?

Just scraping off the leftover kernels from the cob and then feeding them directly to your dog should suffice.

Though it is advised not to feed your dog straight from the dinner table as it can contribute to bad habits, so if you are to share the leftover kernels with them, it’s probably best to scrape them into your dog’s food bowl and teaching them that that is where they eat; not from the dinner table.

Another way in which you can feed your dog the leftover corn and kernels from a corn cob is to firmly hold the cob and let your dog eat directly from it. It’s important that you keep a firm grip to prevent your dog from being able to grab the cob away from you.

If your dog somehow manages to steal away a whole corn cob, be careful retrieving it again as they may become protective of their ‘catch’ and try to it eat before you can take it off them. You may need to tempt them away with something more appetising, or their favourite toy.

How Do I Prevent Intestinal Obstructions?

When it comes to corn cobs specifically, it’s best to be vigilant with the disposal of used cobs. Dogs are very smart when it comes to sniffing out their favourite scraps of food, and even the most well-trained dog can dig through your household bin in search of a corn cob.

A dog that’s aware of how corn can be eaten from a corn cob may be even more determined to steal a corn cob from the bin so you may want to avoid letting them eat the corn cob from your hands and instead, scrape the leftovers into their dinner bowl.

Either way, it’s best to either dispose of corn cobs directly into an outdoor bin or to immediately take out the kitchen bin so your dog can’t dig through it and find the cobs later on.

If you notice your dog eating other objects both edible and inedible such as garden plants or shoes, you may need to ask your veterinarian or canine behaviour specialist for their advice.

Nadia Aslam
Nadia is a specialist canine writer hailing from England. With over ten years of experience in training, and rehabilitating canines. She is well known for her easy to read dog training articles and books!